Read the article on AHC published in the Autumn 2020 edition of Rare Revolution Magazine entirely dedicated to rare and complex epilepsies.
Written by Rosaria Vavassori, our Data Manager, and Katherine Behl, vice-president of AHC-UK, the AHC patient association in Great Britain; both their children are affected by AHC.
https://bit.ly/3jQI4Wr

A new study of cardiac repolarization in patients with AHC (QTc-AHC Study) has been launched by the Duke University team (A Landstrom, M Mikati, M Moya-Mendez, Duke University in North Carolina, USA).
They propose a quantitative study using electrocardiogram (ECG) data to further understand the impact of AHC genotype in relation to cardiac repolarization, specifically the resetting electrical activity of the heart after a heartbeat. A recently published study by Balestrini et al (2020) and previous work by Moya-Mendez et al (2020) describes differences in the electrical activity of the hearts of patients with different variations in the ATP1A3 gene. These electrical activity abnormalities can persist into adulthood and increase the likelihood of certain heart problems in the future.
The goal of this new project is to expand upon and validate these findings by including other institutions and increasing the power to detect an association between AHC genotype and cardiac phenotype.
The study is an IAHCRC multicenter study collecting ECG data, including medications and other relevant cardiac data, from all participating centers.

12 SEPTEMBER 2020
A NEW ARTICLE ABOUT THE IAHCRC STUDY OF CARDIAC INVOLVEMENT IN THE ATP1A3-RELATED SYNDROMES HAS BEEN PUBLISHED IN THE SCIENTIFIC JOURNAL NEUROLOGY
Editorial comment and some follow up recommendations from the Coordinators of the Study Prof. Sanjay Sisodiya and Dr. Simona Balestrini (University College of London, UK)
"Heart disease in Alternating Hemiplegia of Childhood and other ATP1A3-related syndromes
A new large multicentre study led by the UCL (Simona Balestrini, Juan Kaski, and Sanjay Sisodiya) and Duke (Mohamad Mikati) teams has just been published in the journal ‘Neurology’.
Cardiac investigations from 110 people with ATP1A3-related disease, including Alternating Hemiplegia of Childhood (AHC), Rapid-onset Dystonia-Parkinsonism (RDP), and Cerebellar ataxia, Areflexia, Pes cavus, Optic atrophy, and Sensorineural hearing loss (CAPOS), were collected and reviewed by two independent cardiologists with expertise in genetic cardiac disease and sudden cardiac death.
No structural abnormalities were seen on ultrasound scanning of the heart. A high prevalence of repolarisation or conduction abnormalities was found, with a dynamic pattern, and with requirement for cardiac intervention in 3 of the 110 individuals – this is the same rate of intervention seen in people with well-established genetic cardiac channelopathies such as Brugada syndrome, showing that ATP1A3-related conditions are heart diseases as well as neurological conditions.
Cardiac assessment was also conducted in an Atp1a3 knock-in mouse (Mashl+/-) and demonstrated sudden cardiac death due to conduction abnormality as an outcome related to severe seizures, providing a mechanistic link between cardiac abnormalities and sudden death.
Overall, the study confirms that cardiac disease can be found in ATP1A3-related conditions and provides recommendations for change in clinical management of all ATP1A3-related conditions, with a need for systematic cardiac investigation, as cardiac arrhythmic morbidity and mortality are potentially preventable."
The Article is available for Open Access on the NEUROLOGY Website at this link
------------
Read the pdf version of the Editorial Comment

The Study of the IAHCRC Consortium about cardiac involvement in the ATP1A3-related syndromes has just been published on Neurology.
A huge collaborative project, thanks to which it has been possible to obtain conclusive results on cardiac disorders associated with the neurological diseases of the ATP1A3 gene and to define useful indications for drug treatment and patient care.
Congratulations to Dr. Simona Balestrini, Dr. Juan Kaski and Prof. Sanjay Sisodiya, scientific directors of the study at the University College of London, for this fantastic achievement and heartfelt thanks for their continued commitment in the study of AHC and the ATP1A3-related diseases in all their aspects.
The article has been published in Open Access, so that the pdf with the full text can be downloaded freely at this

The article has been published as Open Access at this link 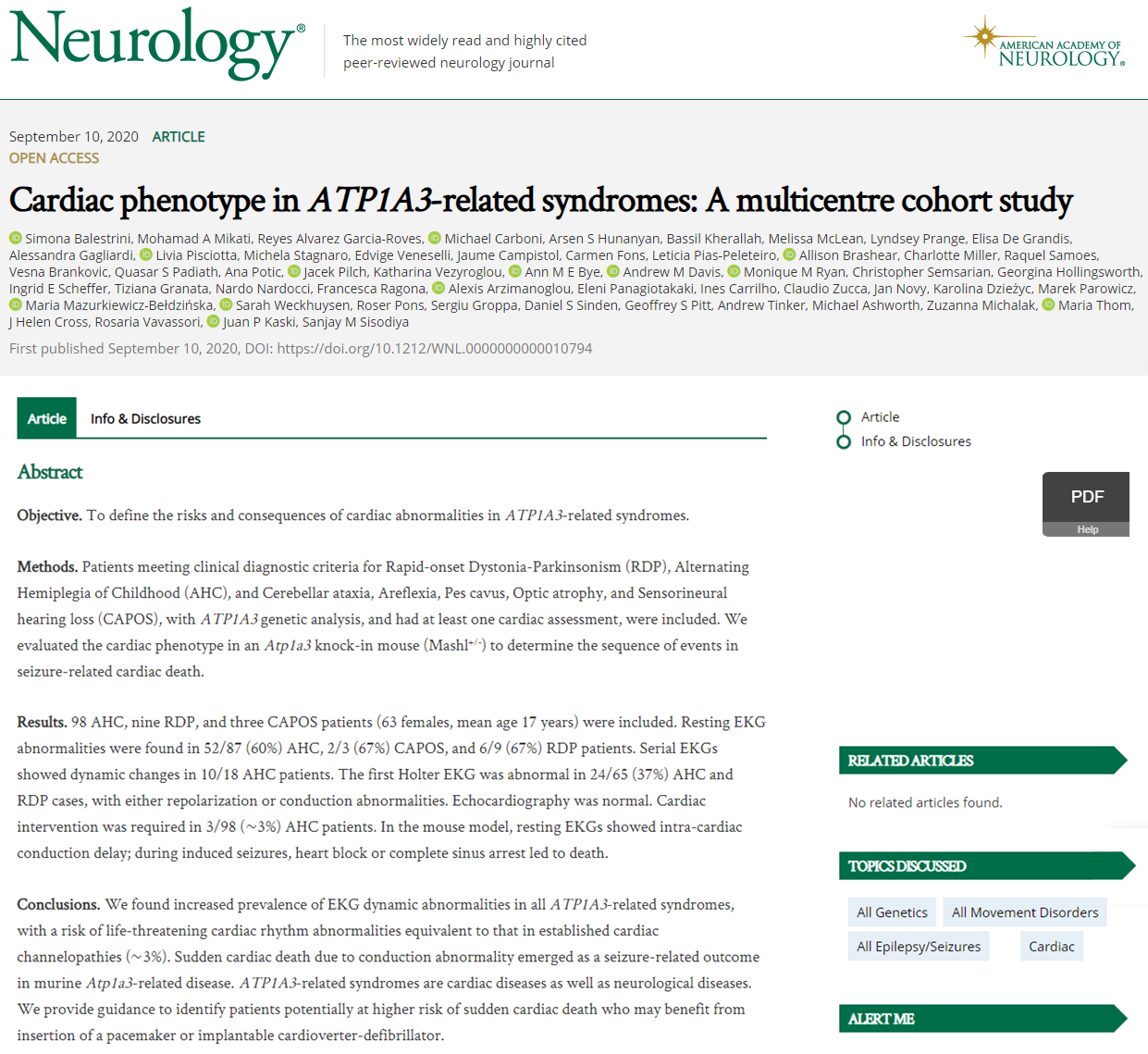 The study makes the point that addressing gastrointestinal disorders is important because failure to gain weight, diarrhea, vomiting, dehydration, and constipation can:

The article has been published as Open Access at this link

A new study of sleep in Alternating Hemiplegia of Childhood (EEG-AHC Study) has been launched by the UCL team (S Balestrini, U Vivekananda, M Walker, S Sisodiya, H Cross, K Vezyroglou, University College of London). They propose a qualitative and quantitative EEG study of sleep, to further understand the mechanisms of benefit of sleep in AHC, and of the sleep disorder in AHC and its association with epilepsy.
Kansagra et al (2019) report a high prevalence of sleep disturbances in a polysomnography study of a cohort of children with AHC. Their preliminary analysis suggests disruption of sleep architecture in AHC. While the effect of sleep on the non-epileptic paroxysmal attacks is clinically well described, it has not been established whether epileptic seizures also are affected by the sleep-wake cycle.
On this basis, the UCL team aim to further analyse and measure sleep disruption, to assess EEG changes associated with epileptic and other non-epileptic paroxysmal spells, and to search for EEG biomarkers of disease severity and outcome.
The study is an IAHCRC multicentric study collecting polysomnography and prolonged EEG data, including sleep and wakefulness, from all participating centres.

3 AUGUST 2020
With great sadness, we read the announcement of the passing of Professor Paul Casaer on the website of the International Child Neurology Association ICNA

With great sadness, we read the announcement of the passing of Professor Paul Casaer former ICNA President & Emeritus full Professor in Paediatrics-Paediatric Neurology, KU Leuven, on 30 July 2020. link
Born on 22nd September 1940 in Belgium, Professor Casaer made many major contributions to the field of paediatric neurology. But the AHC patient and scientific community will always remember him with admiration and gratitude for the fundamental role that he played in assessing the efficacy of Flunarizine as chronic treatment for this rare and complex neurological disease. Thanks to the positive results of his double-blinded international trial with Flunarizine published in 1987, the quality of life of so many AHC patients has been improving since then all over the world. link
Prof. Casaer also contributed to the ENRAH Project (2005 -2009) for the creation of the European Registry for AHC and to the international collaboration that led to the discovery of the AHC-causing mutations in the ATP1A3 gene (2012).

Triggers noted in many patients

Reversible psychotic symptoms occurred in 2 of the 39 patients

You can read the article at this link

The group of the AHC Clinic at the Duke University Medical Center directed by Professor Mohamad Mikati, has recently published four sequential articles about Alternating Hemiplegia of Childhood.
These are their comments and recommendations about each article.

Recommendations on COVID-19 and Epilepsy Care developed by EpiCARE, the European Reference Network for Rare and Complex Epilepsies.
They are available in many languages at this link

20 February 2020
"EPILEPSY AND CANNABIDIOL: A GUIDE TO TREATMENT"

The article is published in open access, with full text available at this link.
You can also read a full Supplement on the topic "Epilepsy and cannabinoids", at this link.

This is an overview of the article from the authors at the Scientific Institute and University Hospital G. Gaslini, Genoa, Italy.

What was the objective of the study?
The study objective was to determine whether brain volumetric and white matter microstructural changes are present and correlate with gravity and type of neurological impairment in subjects with Alternating Hemiplegia of Childhood (AHC).

How many patients were enrolled?
12 AHC subjects (mean age 23 years) and 24 healthy controls with the same age were enrolled.

What methods and techniques were used?
We used advanced MRI techniques to evaluate white matter volume and microstructure abnormalities in AHC subjects. Neuro-radiological data have been correlated with motor impairment and clinical disability scales results.

The article is available at this link.