Alternating Hemiplegia of Childhood (AHC) is a rare neurological disease caused by specific groups of mutations in the ATP1A3 gene. Rapid Onset Dystonia-Parkinsonism (RDP) and, recently, a new syndrome (CAPOS) have been recognized involving other mutations of the same gene.
All these conditions are very rare and partly overlapping in their neurological manifestations. Common pathogenetic mechanisms could be involved.

After the first collaborating research that led to the finding of the specific AHC-causing mutations of the ATP1A3 gene (Heinzen at al., Nature Genetics, July 2012), all the clinicians and basic science researchers involved decided to create an International Consortium, aimed to the effective collaborative research and to the definition of new standards, more performing and accurate, for early diagnosis and optimal care.
In the creation of this Consortium and in the carrying out of its collaborative studies, the research groups and clinical centres have always been supported by ENRAH (the European Network for the Research on AHC), and by the majority of the patient associations member of AHCIA, the International Alliance for AHC, in particular by A.I.S.EA, the Italian Patient Association for AHC, by AFHA, the French Patient Association for AHC, by AHCAI, the Icelandic Association for AHC, and by the American Association CureAHC.

The proposal for an International Consortium was presented at the First Edition of the Symposium on ATP1A3 in disease, organized in Brussels, December 2012, by ENRAH and by the Duke University; the definition of the structure of the IAHCRC Consortium and of the collaborating rules between its members, in the meanwhile involved in another main study about the genotype-phenotype correlation in AHC, were then refined during the Second Edition of the Symposium on ATP1A3 in disease, held in Rome, September 2013, organized by the Catholic University School of Medicine in Rome and by A.I.S.EA.

The structure of the IAHCRC Consortium, as a network of clinical centres and research labs, supported by external patient associations and other non-scientific organizations, is based on the same organizational model defined by the two EU-funded projects “ENRAH for SMEs” (2005-2007) and nEUroped (2008–2011), and can be considered as continuation of the network organizations created by these two projects, in particular the multi-diseases network nEUroped. Although the above mentioned projects were European based, international collaboration with centres of excellence in the field of AHC, both in the United States and in Australia, was estimated of primary importance.
As such the IAHCRC Consortium, focusing on Alternating Hemiplegia of Childhood, has the same objectives, mission and methods as the nEUroped network, with respect to the further development of diagnostic tools, effective treatments, global care and management issues and international dissemination of information. 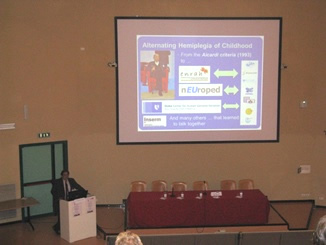 Prof. Alexis Arzimanoglou describes the origins of the IAHCRC Consortium
at the Second Symposium on ATP1A3 in Disease (Rome, 23 – 24 September 2013)

The IAHCRC Consortium was publicly presented for the first time at the Third Symposium on ATP1A3 in Disease (Lunteren, NL, 29 – 31 August 2014). Most of the large collaborative studies currently in execution by the Consortium were also presented at the Symposium, by their coordinators.
During the Closing Session, it was pointed out once again that the collaboration between the researchers, based on common and validated methods and on the fair and organized sharing of the research information and of the patient data, is the most efficient way to make the research progress rapidly towards the final goal of a treatment efficacious for the AHC and all the ATP1A3 patients.
The IAHCRC Consortium, as an organized group implementing all the above-mentioned features, is proving effective for the achievement of this goal.
Tweet